So, all you die-hard blog readers have heard me mention (on more than one occasion) a “Mr. Jang” – my liaison to the world of Korea.  Mr. Jang is my main co-teacher at Jakjeon High School and he’s basically, as he refers to himself, a Korean James Bond (or Macgyver – he’s used both references). He helped me get settled on all accounts when I first arrived, picking out my stellar apartment and getting my bank account in order, and he’s always quick to help me navigate through the cultural taboos/miscommunications that I unfortunately stumble across on an all-too-consistent basis. Basically he’s just a really cool guy and I’m glad to have him on my side. He’s a great teacher with great policies and we work well together.

Anyway, I finally have photographic evidence proving his existence!

This past weekend, Mr. Jang was kind enough to invite me to his home in Seoul.  I met his family (two sons – ages 6 and 10, and his wife) and he gave me a tour of his neighborhood. 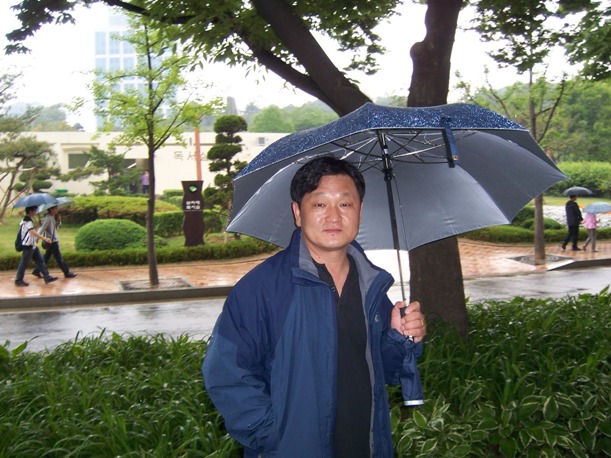 (Mr. Jang at a park near his home. Don’t worry, it’s a cultural thing for Koreans to
not smile in pictures. He actually does like me.)

He then took me to a really cool little neighborhood called Silim so we could have a local delicacy – sundae (pronounced soon-day). The food is basically noodles and vegetables and pork. It originated as a poor man’s food, and the portions are, even for Korea, humongous. Mr. Jang ordered and I went to town on it. 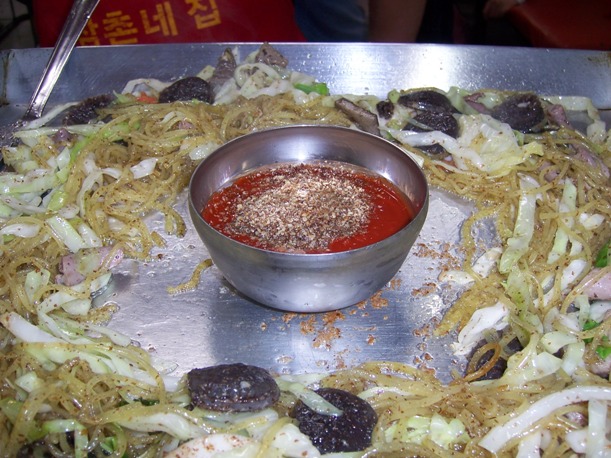 (The sundae before I began to eat. Mmm…right?) 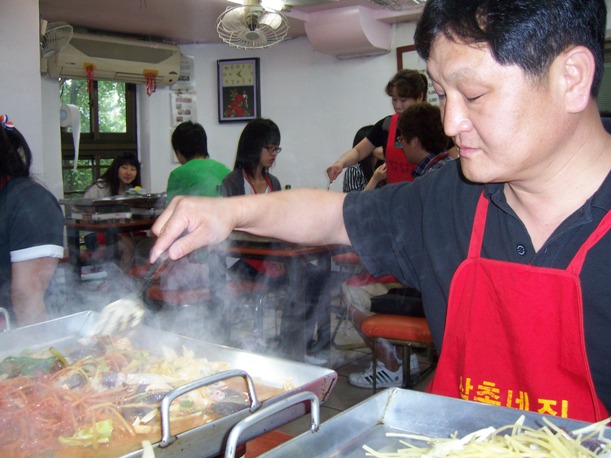 It wasn’t until a friend translated later (via phone) that I found out I was actually eating blood sausage and tripe and pig liver and basically anything internal from an oinker. Before I ate, I specifically asked Mr. Jang what the “sausage-shaped” things were, and he replied “noodles.”  I said, “these are noodles?” and he tried to explain to me that they were bunches of noodles with spices cooked and chopped up, like sausage.  Wrong – it was blood sausuage.  Apparently there are noodles in , along with blood and whatnot, so he was half-right…I guess.  Ugh…

I won’t probably ever eat sundae again (my mind likes to play tricks on me like that), but hey, it was good at the time.  Yet another case of me needing to learn to not ask questions about what I’m eating. I need to stick to my rule: If it tastes good, keep my mouth shut and just chew.

I break this rule all too often, though. ::sigh:: 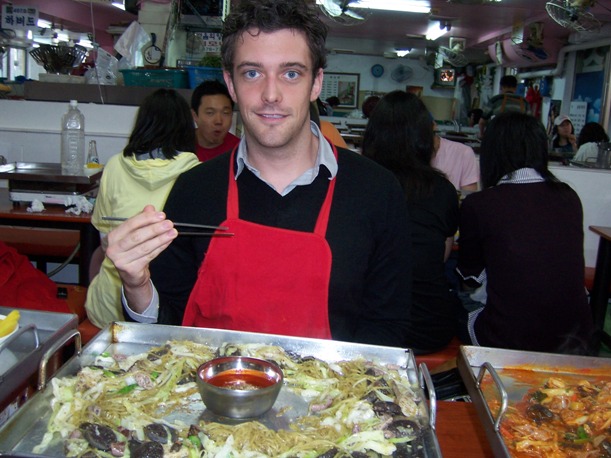 (My look of glee shortly before discovering what it was I was eating.
This expression quickly turned into a disheartening frown.)

Next, Mr. Jang and I met up with some other teachers and we went…wait for it…drinking!  He introduced me to a Korean liquor called jook soon ju – which is bamboo-flavored soju.  It was delicious, tasting a bit like apple juice, and wow…did it go down easy.

I had a great time and it was really cool hanging out Mr. Jang like this, as I’ve only seen him outside of school a few times. He loves explaining Korean culture to me and I love learning about it, so it’s a great combo. 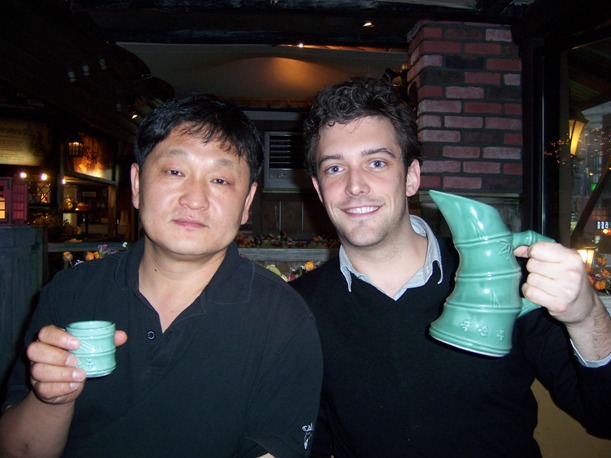 (Good times with the Jang-meister.  I swear he really does like me!)

I look forward to many more adventures with Mr. Jang.

2 thoughts on “The elusive Mr. Jang”