Yeah, well, that title is about as clever as I’m capable of being today.  Deal with it. 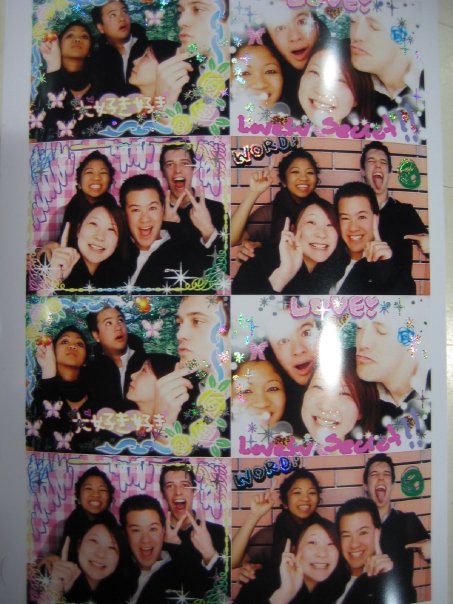 Not much to report, I’m afraid.  Been sticking close to Incheon/Seoul area to save some money – although, there are plenty of things to do in both.  As you can see from the above photo, visiting a sticker booth with some friends (albeit an older picture) is one of many things you can do to pass the time in Korea.  Woot!

Taekwondo is going well and I think it’s something I’d like to continue for a long time.  I want to stick with it and get better, unless my long legs get longer and more awkward, at which point I’ll hang up my white belt for good.

School is great.  I love making lesson plans and being in charge of what the students learn.  Some of my friends teach at schools where they must teach out of books, which can stifle creativity.  I’m glad this isn’t the case with mine and it’s cool already seeing some of the students get better at speaking English.

I’ve also been studying the Korean language and I now have the consonants and vowels memorized, which is a big, first step.  I don’t want to slack on learning the language, as it’s everywhere and I feel as if I owe it to my host-country to speak their native tongue (not just a few phrases).  It’s polite, after all.

It’s still odd to me, being in Asia instead of the USA.  Not in a bad way, but back home I’d hear so much about things going on here, but was always separated by such a vast ocean and many thousands of miles that it was easy to put it out of my mind.  Actually being on this side of the world, living here and interacting with the people here, has made me really start listening a whole lot better.  I want to get involved.

And, if you aren’t aware, Asia’s had some bad cards dealt lately. Cyclone Nargis hit Myanmar (Burma) hard earlier this month and left nearly 130,000 dead. The already impoverished country is running out of food and resources and with the hot summer months coming, there’s a new fear of dengue fever spreading quickly. Check out some articles here and here if you’re not caught up to speed.

If that wasn’t bad enough, China experienced a massive earthquake a few weeks back (registering 7.9) that left over 60,ooo dead and displaced another 5 million from their homes.

There’s also been a lot of issues with South Korea importing beef from America. Supposedly Koreans run a higher risk of contracting Mad Cow disease, based on the parts of the animal they eat regularly, so this has been an ongoing thing for the past month or so. You can check out more about it here.

I don’t trust most donation sites, seeing as scam-artists aplenty can swindle anyone into thinking they are legit and it can be hard to tell the difference, but Google sponsors some donation links that are easy to follow and you know it’s the real thing. Here you go:

Here’s a great link to a Google-sponsored donation site for those affected by the Myanmar cyclone. You have your choice of UNICEF and Direct Relief International. Everything will help.

And here’s another Google-sponsored site for the China earthquake victims (Mercy Corps and Tsinghua Foundation). Check it out, do what you can.

Anyway, just some food for thought (no pun intended, Korea), and I’ll be updating again later this week. Promise.