2010 is going to be a good year for my comic book company Saint James (and me and my writing, by proxy).  In 2009 we managed to put out the first issue of two of our series (Ex Occultus and Indego Blue), as well as a host of free Ex Occultus mini-adventures exclusive to our website (which you can find here).  This year, though, we’re really going to shine.

It was our hope (Jesse and I) upon starting the company that we would not fade away, that we would, in fact someday become a powerhouse comic book publisher.  I don’t think that’s too lofty a dream, and I know we have the ideas and the MMPH to get there, it’s just a matter of increasing our fan-base and showing the world what we can do…given the opportunity. 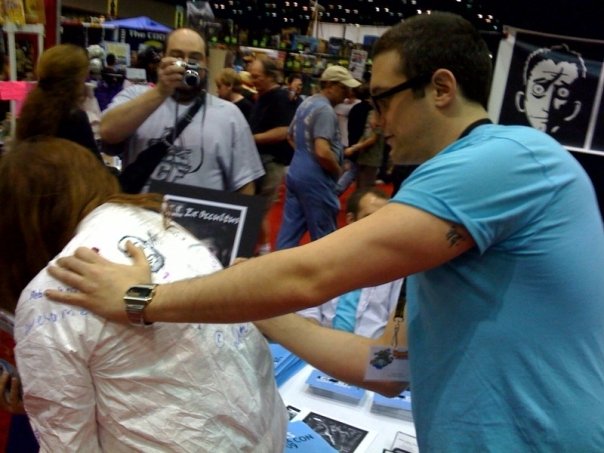 That being said, we will be almost tripling our current roster of for-sale comics in the coming months, which is pretty sweet.  I’ve been writing my butt off, as have the other Saint James peeps, and we really are excited at what’s coming:

MINUTEMEN #1: Minute Men is the story of John Parker, a time traveling agent for a top secret government organization whose job it is to patrol key points in history to ensure that events play out they way they are supposed to. On a routine trip back to Lincoln’s assassination, he finds an old partner shot dead and robbed by what looks like a twenty-first-century weapon. As more agents are killed in action, Parker must find out who is responsible for murdering the agents before the mysterious, rogue assailant is able to alter the course of history forever.

YOUTH IS SWEET #1 (of 6): Eldon Finch was supposed to be enjoying his golden years. Instead, he is nearly gunned down by a mysterious group of men. Finch soon learns the incident is related to his distant past – that his involvement in a Cold War-era covert ops group, SPECTRUM, may have finally caught up with him some thirty years after faking his own death. Youth is Sweet is a six-issue limited series that follows sexagenarian Finch as he tries to reconnect with the surviving SPECTRUM members, men who don’t want to be found. Together they desperately try to discover why the government thinks they are so dangerous, as they stay one step ahead of a murderous new breed of Government Black Ops soldiers bent on silencing them once and for all.

EX OCCULTUS: SEAL OF SOLOMON (one-shot): 1874. Sofia, Bulgaria. Wakefield and Hollander are hired by a mysterious nobleman to track down the fabled Seal of Solomon, a ring of supernatural origin with the abilities to summon and control demons. What first appears to be a simple mission, however, soon becomes something far more deadly.

EX OCCULTUS: TOMB OF ACHILLES #1 (of 2): 1875. Island of Tenedos, Aegean Sea.  Kidnapped by rival occultist Henry Salt and his band of thugs, Wakefield and Hollander are forced to scour an ancient, forgotten crypt for the fabled arrow that pierced Achilles’ heel. With menacing traps around every corner and the maniacal Salt pulling the strings, can they make it out alive?

Last but not least, what would a comic nerd be without a venue for his nerd-dom? A (tentative) list of comic cons I’ll be attending with Saint James in 2010:

That’s about it.  I’ll be updating more as I go, including release dates for said comics, so stay tuned for those announcements.  Good times ahead!  Rocknroll.