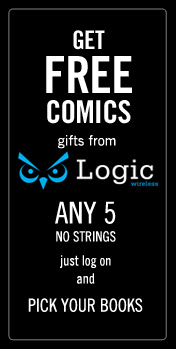 So, the comics I write for Saint James Comics are available to buy a variety of ways online (for mucho cheaper than what the print versions go for,just FYI), and there’s a new company called WOWIO carrying our wares that’s been making some great headway as of late with their digital comic offerings.

Anyway, the cool part: right now, thanks in part to a company called Logic, you can get 5 free comic downloads via WOWIO.  Like, you literally have to do nothing.  Sign up (for FREE), and pick any five comics you want.  Saint James has three comics I’ve written up on WOWIO (which you can see here–two Ex Occultus comics and the first issue of Indego Blue), so, you know, if you get those three, you have two left to use on…whatever. 🙂

Anyway, click here and look for the image on the left (which is on the bottom of the screen)…then just follow the instructions, check out the Saint James library, and you’re all set.