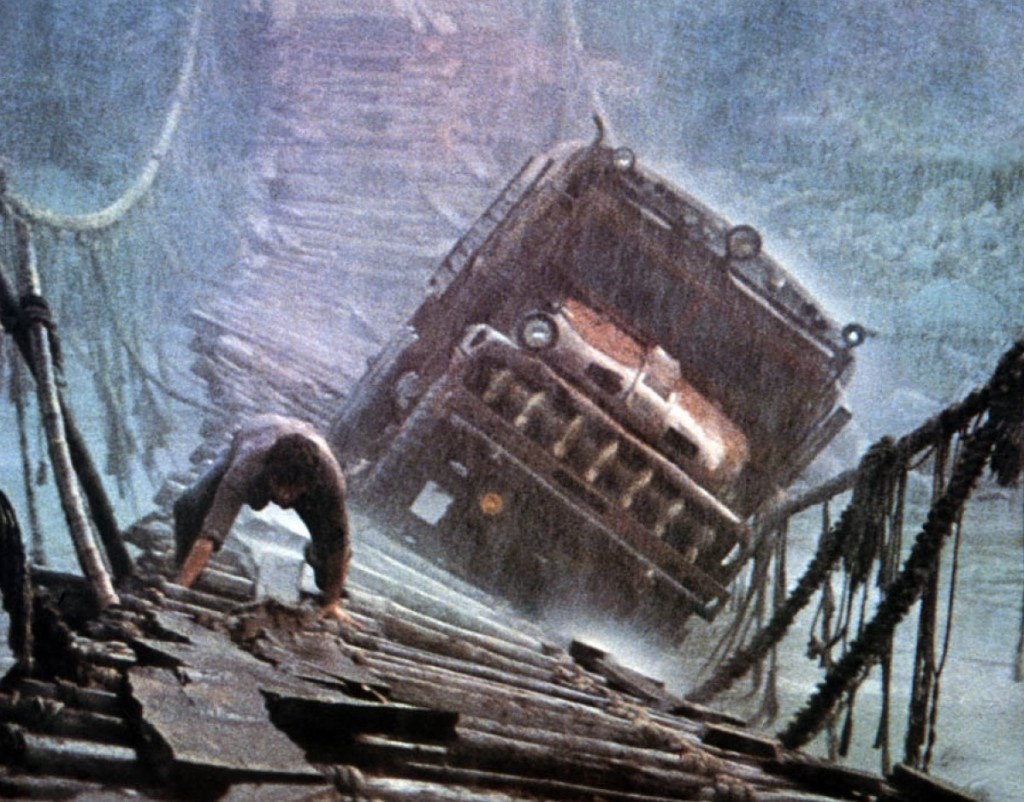 Prepare for a ramble: What a glorious film. A film that had no business being as good as it is. Sorcerer was lost in the annals of film history, overlooked for a myriad or reasons—chief being, it seems, because it had the displeasure of being released in such close proximity to a little film called Star Wars—but was re-earthed years later and is now called—rightfully so, I might add—a masterpiece.

Why am I so attracted to this film? (Yes, I’d argue that attraction is correct when talking about films, at least with me.) I have, plenty of times, droned on about my love of landscapes, and even my book Mesilla is about the futility of man trying to shape the landscape, trying to harness it without fear of retribution. And, see, that’s the key for me: I love nature, I love being outside, but man versus nature in literature, or in film, is ultimately about reminding the man that they are mortal. And that nature is not…that it continues on long after we are gone. And am I so attracted to that theme, that idea, that we are motes of dust in a large dust storm. We love stories where man triumphs over nature, or survives purely by sheer will in order to see [insert trophy] once again. But, in reality, while this does happen, sure, it’s so easy to forget how miniaturizing nature is.

And that, I think, is what is so great about Sorcerer (which is a re-telling of the 1950 French novel Le salaire de la peur). The film finds, by happenstance, four disparate and desperate outcasts brought together in the small South American village of Porvenir (a country is never given), and the plot is, really, pretty simple: an American owned oil well catches fire, and these four men volunteer to drive the nitroglycerin 200 miles through the jungle needed to extinguish it. And that’s it. And the bulk of the movie is just that: them driving, trying to survive, coming together and dealing with what falls in front of them, etc. We don’t get much in the way of backstory, minus vignettes at the beginning of the film, and there isn’t much dialog either, but, regardless, this is one of the most thrilling films I have ever seen. Partially, I wager, because they actually had to film in the jungle. Because they actually were driving trucks. Because the crew actually had to contend with nature (infamously, due to shooting locations, and conditions, the cost of the film swelled substantially during filming). But you can feel the tension in a way I haven’t felt in a film in a long while. And is sustains throughout, until the very end.

Some classify this film as existential…sure, that’s fine. I can see that: There is a big hunk devoted to reinventing your life, if that’s ever really possible, making something of yourself (after tragedy, in this instance). And maybe that’s what attracts me to the film, too: besides being gorgeously shot and masterfully edited, a film where the landscape is as much a character an anyone else, this falls in line with my whole “what is life…who are we…especially compared to the realm of nature we so quickly try to distance ourselves from but often find ourselves intertwined with” obsession. Maybe.

I was scared, by the end, that this was yet another “white man saves the day” picture, what with Roy Scheider’s Jackie Scanlon—a very white man who, unfortunately, is referred to as “Juan Dominguez” for the last two-thirds of the film—the only survivor, the savior of the people of Porvenir who depend on the well for jobs. But the closing scene (a car pulling up, henchmen emerging, ready to dole out long-overdue justice to poor old Jackie) was sublime. It was the ending needed, deserved. While Scheider’s Jackie is dancing with a local scrub woman in a bar—a gesture, perhaps, to honor the late Bruno Cremer’s Victor character (who, earlier, was seen flirting with her)—and then as the camera pulls back, floats above Porvenir, backwards into the atmosphere, watching as the henchmen enter, not seeing what happens next but understanding what will happen next, we get what Director William Friedkin and writer Walon Green were getting at: you can’t escape your past, not fully. You carry it with you, around your neck, wherever you go. But you need to learn from this, and if you don’t…the jungle eats you alive.

And, ultimately, there is no white savior story here: the people of the village of Porvenir will continue on while all the outsiders who came, who would be seen as heroes, were wiped from the earth.

My score: 5 out of 5 jungle trucks