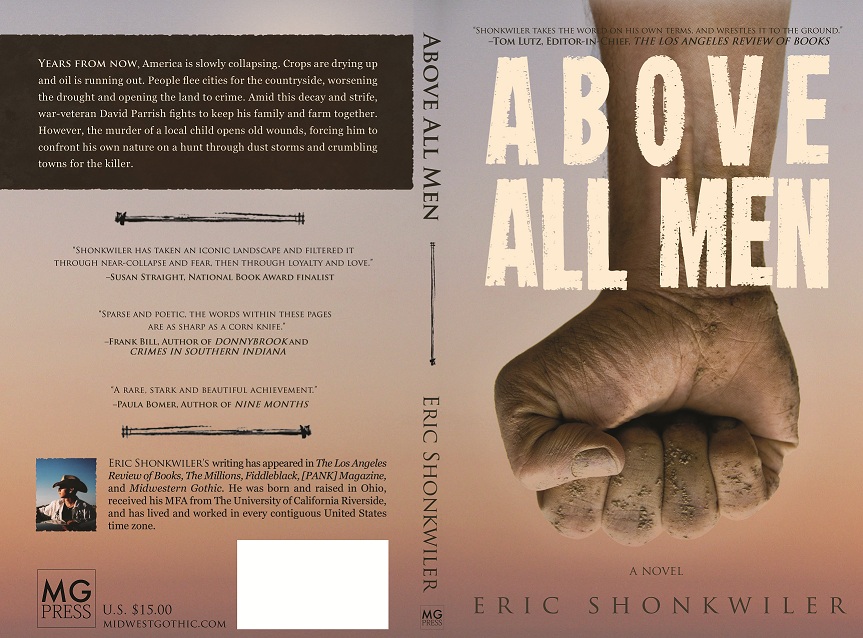 I’m thrilled to finally be able to announce (after months of working on it) the newest release from MG Press, the micro-press arm of Midwestern Gothic, the novel Above All Men by Eric Shonkwiler.

The book, scheduled to release March 2014, is described as thus:

Years from now, America is slowly collapsing. Crops are drying up and oil is running out. People flee cities for the countryside, worsening the drought and opening the land to crime. Amid this decay and strife, war veteran David Parrish fights to keep his family and farm together. However, the murder of a local child opens old wounds, forcing him to confront his own nature on a hunt through dust storms and crumbling towns for the killer.

And it’s already racked up some amazing advance praise:

“Shonkwiler takes the world on his own terms, and wrestles it to the ground.” –Tom Lutz, The Los Angeles Review of Books

“Shonkwiler has taken an iconic landscape and filtered it through near-collapse and fear, then through loyalty and love.”
–Susan Straight, National Book Award finalist

“Sparse and poetic, the words within these pages are as sharp as a corn knife.”
—Frank Bill, author of Donnybrook and Crimes in Southern Indiana

Seriously, these are some masterful folks saying some kind things about the book—so happy they enjoyed it and were willing to share their thoughts with us.

Eric is a true master of the craft, and here he’s created a sublime tale about murder and revenge and family, highlighting values unique to the Midwest while also speaking to a larger audience…exactly the sort of story we were hoping to put out when we launched the press. So happy we can finally start sharing this book with the world.

You can pre-order a copy of the book for only $1 (any format) and save 20% off the cover price when it goes live.

Check out the book here.