This will be ongoing, as I see and experience more food and drink on my adventure.  Some of this I like, some I abhor, others are just noteworthy for being, well…odd.

Rice Cake (Tteok) – Okay, this stuff is gross.  Sure, it looks pretty, but man oh man, does it taste foul. 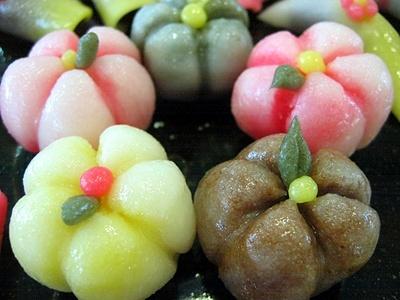 First of all, even though it looks sweet, it surely is not. In fact, they are mostly what you would consider savory. And, they use red bean as a desert, which is just gross.  They come in all sorts of shapes and they eat them like…well, like candy.

Okay, so I was sitting in my lounge yesterday at my desk, surfing the internet, and the teachers started gathering around these couches, talking and sitting over a giant plate of rice cakes of various colors and sizes. My buddy, Mr. Jang, waves me over and says “Robot, they would like to have rice cakes with you. Hurry, before they are gone!”

Yes, very generous and I was thrilled. Part of the teachers – I have been accepted. So I go sit on the couch and Mr. Jang leaves. The only other person in my lounge (the English dept.) that speaks English is Mrs. Kim (or who I have dubbed Lisa) and she was gone too. But, whatever. I sat down and one teacher hands me chopsticks and then offers me the plate. I’ve had one or two of these “cakes” before and knew which one I could stomach (for the record, it isn’t THAT bad, just really chewy with no flavor), so I was reaching for one and she stops me and says “no.”

Then she precedes to hand me the biggest rice cake on the plate. It looked like a log with red beans all over the top of it. So, I couldn’t say no, and I took the thing in one bite and I swear it took me close to five minutes to chew it. Luckily, another teacher handed me a cup full of Pepsi and I chugged it down while I was trying to chew as if my life depended in it.  I almost gagged twice but felt bad and didn’t want to show it so I was trying to smile, drink Pepsi, chew, not puke, and be as pleasant as possible all at the same time.

Ugh. This sorta thing happens almost daily with a wide variety of food.

Kimchi – By far the most plentiful dish in Korea. And there are so many times. Basically, kimchi is pickled whatever. In most cases, and the most well-known, it’s cabbage. Fermented, pickled cabbage. It’s actually really, really great, but they eat it every day for every meal. In some form. There’s even kimchi ice cream, I’ve been told. 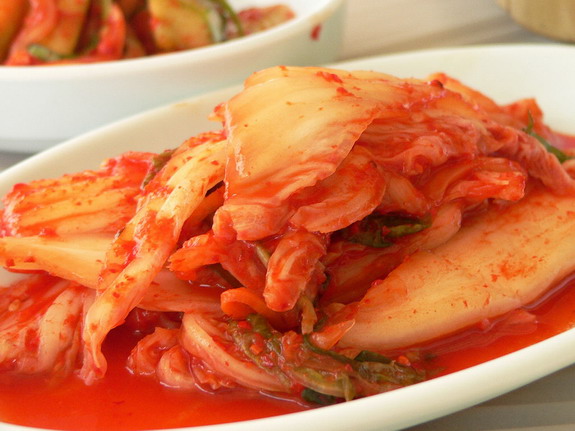 And then there’s radish kimchi (Calibri), which is my new favorite. It’s basically cubed, fermented, pickled radish and it’s pretty good. I try not to ask too many questions, about a lot of the dishes, because I figure I’ll just freak myself out.

Mushrooms – They are EVERYWHERE here. Seriously. I like mushrooms, but man, it’s an overkill.

Seafood – Korean food is not for the squeamish. I myself fell into that category for a majority of my life but really opened up in the last five years. And man I’m glad I did. This is the type of place where you physically see your food swimming in front of you and you pick it out and they chop it up. That simple.  For example, take these little buggers:

On my block alone there are so, so many tanks of octopi and squids swimming around, trying to make the best of a small tank. Saw a guy scooping one out with a net yesterday. Right to the pot, I assume. Granted, I’d rather have fresh seafood, and I have since being here, but just getting used to seeing it wriggling is a bit odd. But, I love meat, so no going back for me.

Fried seaweed – So, so good. I couldn’t find the exact picture (I imagine it changes depending on where you go), but it’s sweet and savory at the same time with a great crunch to it. 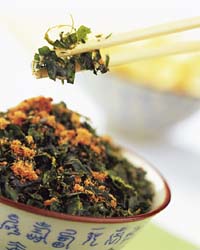 Seaweed in general is one of those things I could probably eat every day and not get sick of.  I love it and it’s prepared in so many different ways.

I guess we’ll see after a year, though, how I feel.

6 thoughts on “Food and drink, volume 1”