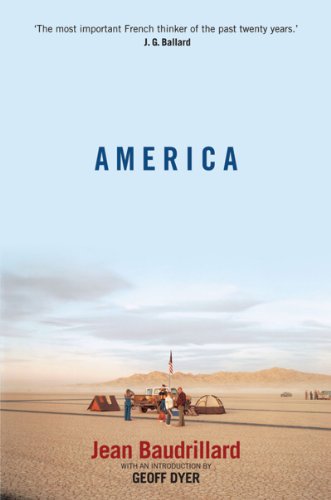 In his introduction of the text, writer Geoff Dyer calls Jean Baudrillard’s America a “spectacular album of rhetorical postcards and road notes.”

A book I’ve been meaning to get to for a long while, America is an absolute treat—through Baudrillard’s eyes we see the United States through virgin light: to witness the sights and sounds and scenes and the people and our habits and customs. It creates dialog within oneself, a dialog that cuts through political ideologies and religious red-tape we face daily—the sorts of things that can be the cause of self-wars deep within our minds—and seeks to understand, simply, “What makes us tick?”

It’s an engaging read that, while heavily philosophical, borders more on road trip diary, a text you can envision as you read; Baudrillard’s language lilts off the page as he describes vast deserts and Vegas and Minneapolis (“with its sweet-sounding name, its gossamer string of vowels”) and you can’t help but be carried away by it all.

It’s a short read, a powerful read, and I’d highly recommend America to  everyone.

A few of my favorite passages:

“As soon as you set foot in America, you feel the presence of an entire continent — space there is the very form of thought.”

“America is the original version of modernity. [Europe] is the dubbed or subtitled version. America ducks the question of origins; it cultivates no origin or mythical authenticity; it has no past and no founding truth.”

“The marathon is a form of demonstrative suicide, suicide as advertising: it is running to show you are capable of getting every last drop of energy out of yourself, to prove it…to prove what? That you are capable of finishing. Graffiti carry the same message. They simply say: I’m so-and-so and I exist! They are free publicity for existence.”