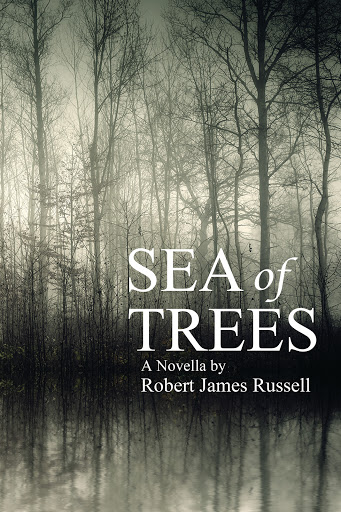 Swirling mystery permeates Sea of Trees as Bill, an American college student, and his Japanese girlfriend Junko traverse the Aokigahara Forest in Japan—infamous as one of the world’s top suicide destinations—in search of evidence of Junko’s sister Izumi who disappeared there a year previous. As the two follow clues and journey deeper into the woods amid the eerily quiet and hauntingly beautiful landscape—bypassing tokens and remains of the departed, suicide notes tacked to trees and shrines put up by forlorn loved ones—they’ll depend on one another in ways they never had to before, testing the very fabric of their relationship. And, as daylight quickly escapes them and they find themselves lost in the dark veil of night, Bill discovers a truth Junko has hidden deep within her—a truth that will change them both forever.

Sea of Trees was nominated in 2012 for a Pushcart Prize.

PRAISE FOR SEA OF TREES

“Darkly beautiful, replete with intriguing bends, Russell’s novella unfolds much like one of the tree-shrouded paths comprising its protagonists’ somber, captivating journey, the characters’ psyches as perilous as the forest in which they find themselves lost, the book’s stunning vignettes like narrative shrines to those who have chosen to make their end in Aokigahara.” —Charles McLeod, author of National Treasures and American Weather

“What is it about trees that terrify us so—there’s a frightening and twisted stillness to them, but yet they are like us: vertical, yet reaching. Perhaps we think of Dante—the trees in the Inferno are actually people who have taken their own lives and forced to suffer in their frozen bodies. The image of the couple in Sea of Trees traversing through a dense forest searching for answers concerning the suicide of Junko’s sister is haunting and suffocating at times—the shadows hiding bodies of those who suffered the same fate. As they walk, the trees seem to whisper their stories of where they have been, what they have seen.” —Brian Oliu, author of Level End

“Joseph Campbell says that in life we must enter the ‘forest at the darkest point, where there is no path,’ that to follow another’s path is to fail to truly live. In Robert James Russell’s Sea of Trees, a young couple follows a sister’s suicidal trail into the fabled Aokigahara Forest, where they must try to pass through the grief that’s come between them—and where Russell’s subtle structure puts us readers in danger too, left to recognize ourselves in all the other ghosts hung from those trees, hung lonely together.” —Matt Bell, author of Cataclysm Baby

“My intellectual breath was taken away by the spell that Russell created in his debut novel. He has a beautiful literary mind.” —Katrina Mendolera, Cellar Door Lit Rants & Reviews

“A quite eloquent book to luxuriate in and be swept away into an ever receding sea of trees.” —Marc Nash, Booksquawk

“Russell’s definitely made it to my list of rare finds for 2012.” —Nerine Dorman

“At a slick, swift 105 pages, this story is no longer than it needs to be but it casts it spell, putting its cold fingers around your wrist and leading you into the forest where evermore macabre sights await.” —Cee Martinez

“Russell’s writing is raw, real, and stunningly palpable. A book that will grip your soul, Sea of Trees will envelope you and hold you until the very end.” —L.M. Stull

“Never have I read a work so balanced, so pleasing.” —Andrea Kinnear, Faulkner 2 Fibonacci

“It’s not quite like anything I’ve read before; It’s quick, unique, and definitely worth checking out.” —C.J. Opperthauser, Mud Schematic

Interview at All Kinds of Writing

Interview at The Collagist

Interview at Muse in the Valley

One thought on “Sea of Trees”