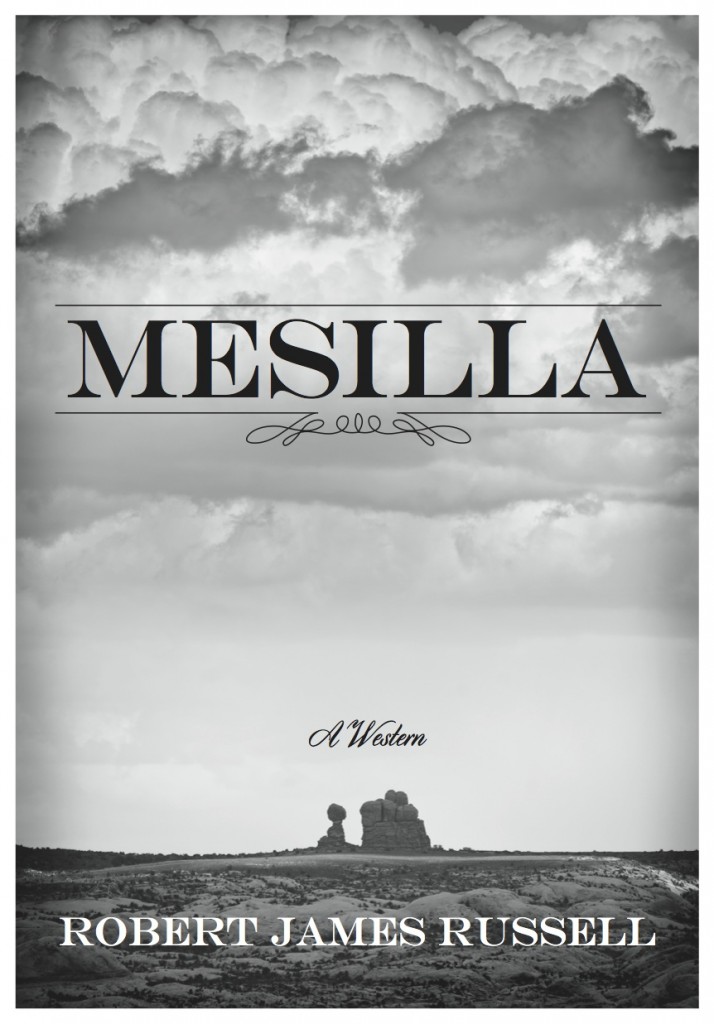 1863, New Mexico Territory. Shot full of holes and on the run from the relentless pursuit of his one-time friend now intent on retribution, Confederate deserter Everett Root finds himself navigating the brutal desert headed to the town of Mesilla, where he believes salvation lies. But when Everett stumbles on a cache of silver, and a young girl who’s lost everything, he is forced to take stock of his past and his future. Full of sprawling landscapes and wild gunmen, Mesilla is a story of one man’s resolve to rectify the wrongs he has committed and make peace with his place in the world.

“A shotgun marriage between classic and revisionist Western, Mesilla sings a hard-bitten practicality and brutal authenticity.” —Emily Schultz, author of The Blondes

“In a mounting gush of sumptuous prose, Robert James Russell’s Mesilla scrubs bare the elements of the classic Western—the wounded, questing hero, the damsel in distress, the shoot-outs, the relationship with the horse, the murderous, phantasmal villain in hot pursuit—and reinvents them as existential meditation. In exhilarating fashion, Russell often turns his lens from these tropes to focus on the ever-looming natural world, the components of which shake off all of the beautiful names we’ve attached to them; in Russell’s old West, the rocks and trees and grasses and rivers bear witness to our tragedies only because we tell ourselves that they do. If McCarthy and Emerson collaborated on a novella, solicited Herman Hesse to edit it, Jim Jarmusch to film it, and Leonard Cohen to do the score, the result might capture some of the elusive seductiveness of Russell’s work.” —Matthew Gavin Frank, author of Preparing the Ghost and The Mad Feast

“If Albert Camus had written Westerns, they might have sounded something like Robert James Russel’s Mesilla. Tough as rawhide, coiled like a diamond back, and spare as the New Mexico desert, this taut novel is as loaded as the Dance revolver its wounded hero wields. Russell is a writer on the rise, with a voice and vision sure to entrance every reader who lays eyes on this book. I’m already pining away for his next one.” —Peter Geye, author of The Lighthouse Road and Safe from the Sea

“Robert James Russel’s Mesilla reads like young James Lee Burke—action so sharp readers might as well pull their fingers from the page looking for blood. A fine story of revenge in the old west, salvation hoped for, but not easily achieved.” —Urban Waite, author of Sometimes the Wolf

“Spare, unforgiving, relentless, beautiful. Those words describe three things: the New Mexico desert landscape in 1863, the plot of Mesilla, and Robert James Russell’s language which never seems to break a sweat on the novella’s pages. Mesilla is a welcome return to the western novels of Elmore Leonard, with a cinematic touch of Sergio Leone along the way, as a bullet-riddled man flees his former friend bent on exacting vengeance, no matter the cost. Mesilla is a short novel, but one which will stretch long in my memory. You may come for the exciting chase scenes, but you’ll stay for the thoughtful way Russell probes the human condition.” —David Abrams, author of Fobbit

Breathtaking, beautiful, and bloody as hell, Mesilla kept me captivated straight through to the very end. The book is all landscape and language, Russell is one helluva talented writer. The only complaint I have is that I wish it were longer. —Lori, The Next Best Book Blog

Spare, unforgiving, relentless, beautiful. Those words describe three things: the New Mexico desert landscape in 1863, the plot of Mesilla, and Robert James Russell’s language which never seems to break a sweat on this novella’s pages. —David Abrams (who selected Mesilla as one of his favorite novellas of 2015)

Robert James Russell’s Mesilla took me straight back to the Old West, a setting I’ve known and loved since my baby-boomer childhood. I didn’t want Mesilla to end. It’s exciting to see this young writer leave his mark on this venerable American genre. Here’s hoping he’ll take us back to the West very soon. —Cynthia Canty, Michigan Radio

“A simple story of pursued and pursuer wrapped in lush and stirring detail, Mesilla offers a great way to gallop through an easy afternoon with some cowboy coffee or a slug of whiskey.” —Mel Bosworth, Small Press Book Review